“The implementation of SYSPRO is a major step in B&R’s ongoing strategy to delight our customers through outstanding customer service supported by innovative systems.”

Tim Bridges, B&R Director, is the grandson of the company’s founder. Bridges joined B&R in 2012, when the company was still running its operations on 20-year-old enterprise resource planning (ERP) software. “We’d extracted as much out of the old system as we possibly could. It was holding us back, especially from our international expansion plans. I joined the company to project manage the selection and implementation of a new ERP solution,” Bridges says. For several years before Bridges came onboard, B&R was in a joint venture with a large European partner operating under a Tier 1 ERP system. B&R chose not to adopt that system, and began shortlisting other vendors early on in the process of due diligence.

By mid-2012, SYSPRO and one other mid-market ERP system had been shortlisted. “We had a three-day workshop for each system,” says Bridges. “The SYSPRO presenter did an excellent job of showing us the strengths and flexibility of the product. However, there were other important considerations that factored into our final decision.” With nine family members within the business, it’s easy for the B&R team to identify with the company’s family business culture. The business has been built on the back of relationships, both with the workforce and with B&R’s customers. SYSPRO, a privately-held business founded by brothers Chris and Phil Duff in 1978, has long been known for its emphasis on building long-lasting relationships.

“When customers buy B&R they know we’ll be around as long as the product is. We needed to be confident that our ERP provider would be as dependable as we are with our customers. Implementing a new ERP solution can be very risky for any business, as well as being a long-term commitment. You need to know that the fit is right,” Bridges says. B&R turned the old ERP system off on 23 December, 2013 and went live with SYSPRO 7 on 6 January, 2014. “Some of us in the project team lost our Christmas holidays that year, but B&R didn’t lose a single day of business,” Bridges points out.

B&R has implemented a comprehensive number of SYSPRO modules, including General Ledger, Sales Orders, Accounts Payable, Accounts Receivable, Material Requirements Planning (MRP), Bill of Materials (BoM), Work in Progress (WiP) and Product Configurator, as well as modules for Reporting and Analysis.
B&R Enclosures also bought the Preactor Factory Scheduling module, which has yet to be implemented. “Our scheduling requirements are complex, as we handle thousands of WIP and raw material Stock Keeping Units across our different supply strategies (Make to Stock, Make to Order, Assembled to Order, and Engineered to Order). We initially planned to go live with Preactor when we went live with SYSPRO 7, but held off as we simply were not ready,” Bridges says.

B&R implemented full integration between SYSPRO’s financial, distribution and manufacturing modules. “We now have real-time visibility across our consolidated group, and our financial data is always current thanks to real-time integration,” Bridges says. “We’ve also eliminated large volumes of month-end journal entries, which has significantly reduced the time required to produce month-end financial reporting.” B&R’s SYSPRO platform is also a part of B&R’s international expansion. ‘We’ve recently expanded into the New Zealand market, and have created a new subsidiary company based on the NZ currency. That would have been quite difficult with the old system, but it’s been relatively simple with SYSPRO. Although B&R did have MRP in its previous system, there were issues around the visibility of demand and user faith in the quality of data produced. ‘SYSPRO’s MRP is growing traction in our supply chain management as a valuable tool to drive production efficiencies,” Bridges says. “The quality of our data remains a key business initiative, and without this MRP is not reliable.” SYSPRO has also provided B&R’s customers with better visibility into the status of their orders.

The company has implemented automated HTML order acknowledgements and dispatch advices. Once an order is placed, the automated processes trigger an HTML e-mail to thank the customer for the order and provide confirmation details. As soon as the product is dispatched, customers receive a further notification detailing the shipment as well as items remaining on backorder. A critical success factor identified early on during the implementation project was to ensure that B&R invested time in training and educating its user group. “There are always people who will prefer the old system, but as a group I think the users have become very comfortable with SYSPRO. And while it didn’t do everything we needed right out of the box, we have a great team of systems support and manufacturing engineers who continue to innovatively leverage off SYSPRO’s flexibility,” Bridges says.

Asked if he’d recommend SYSPRO, Bridges replies in the affirmative. “Yes, I would. SYSPRO is a platform that we continue to enhance due to its inbuilt flexibility. We are leveraging off the integration capabilities on a daily basis, and will continue to do so into B&R’s future. I don’t have a wide knowledge of other ERPs, but I can tell you that SYSPRO is working for us.” 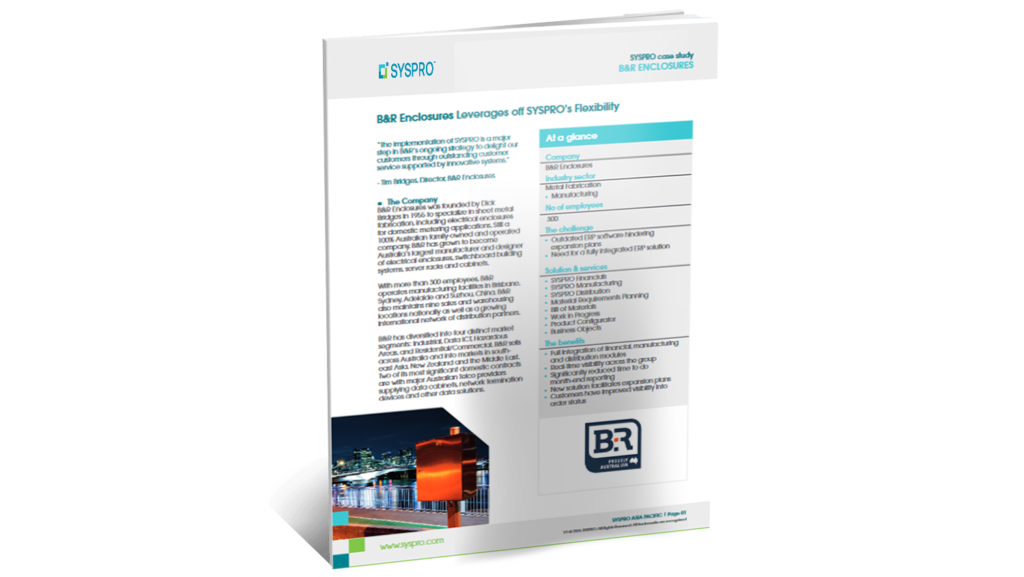 Below are quick links based on your search results 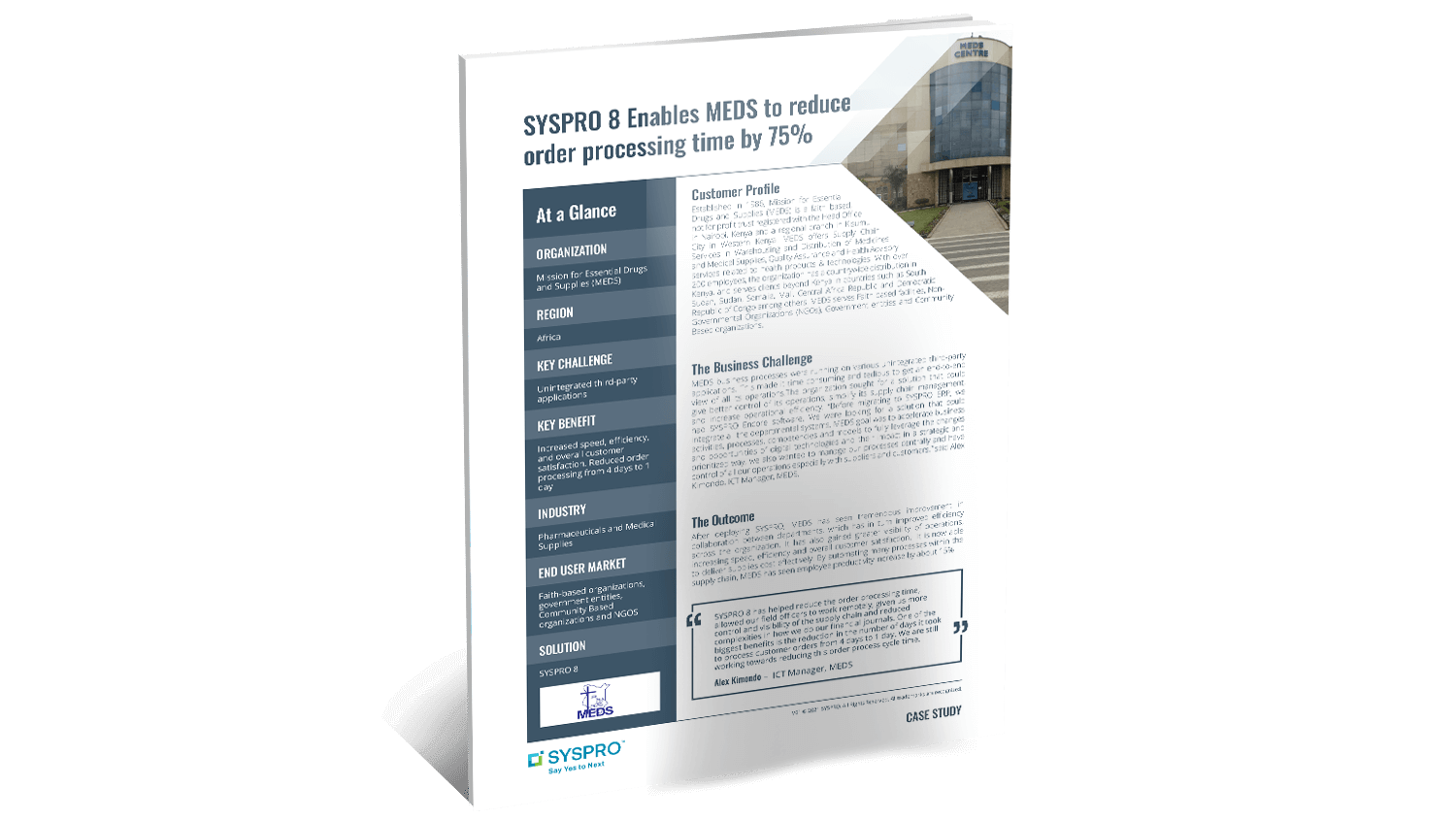 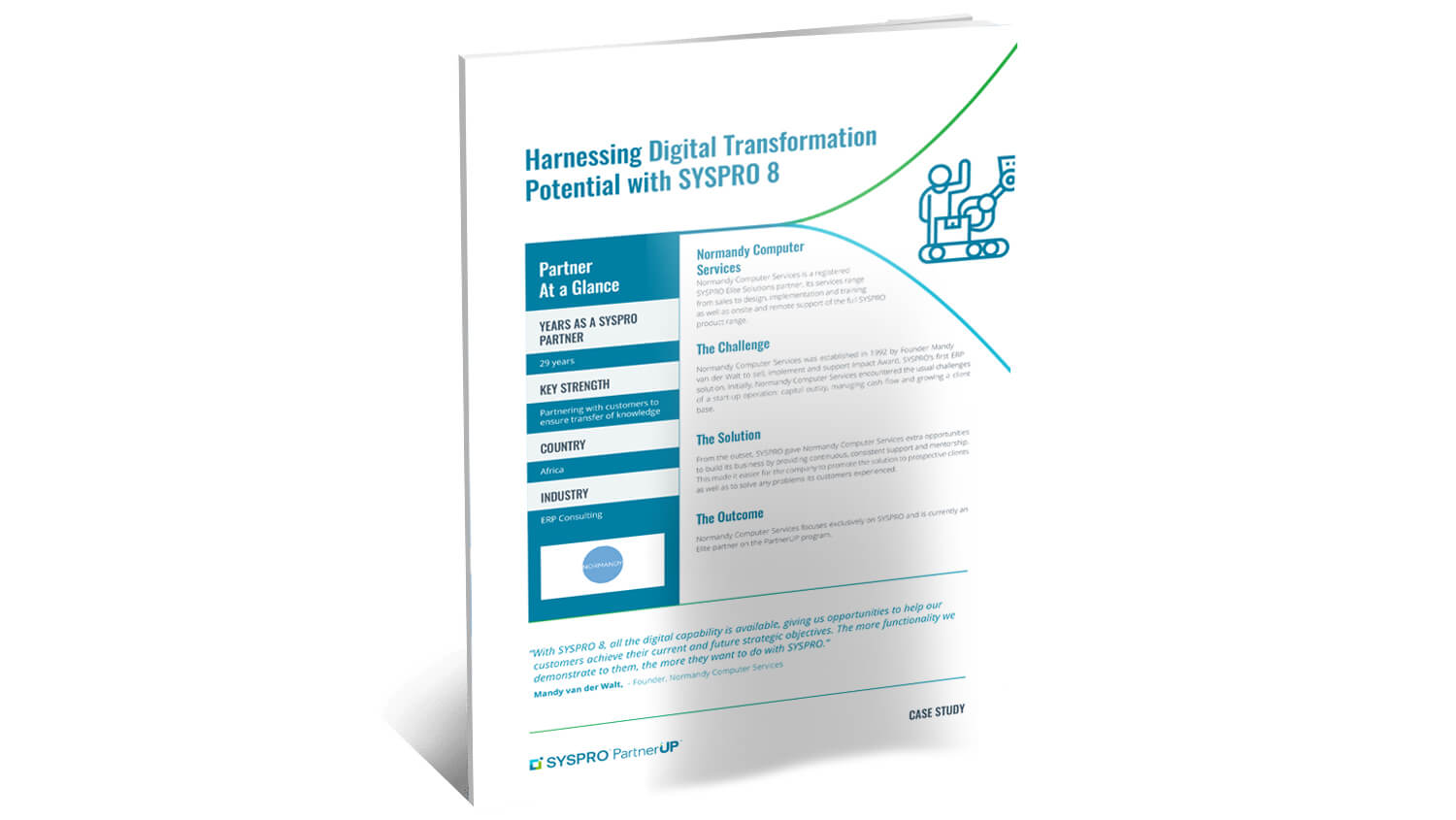 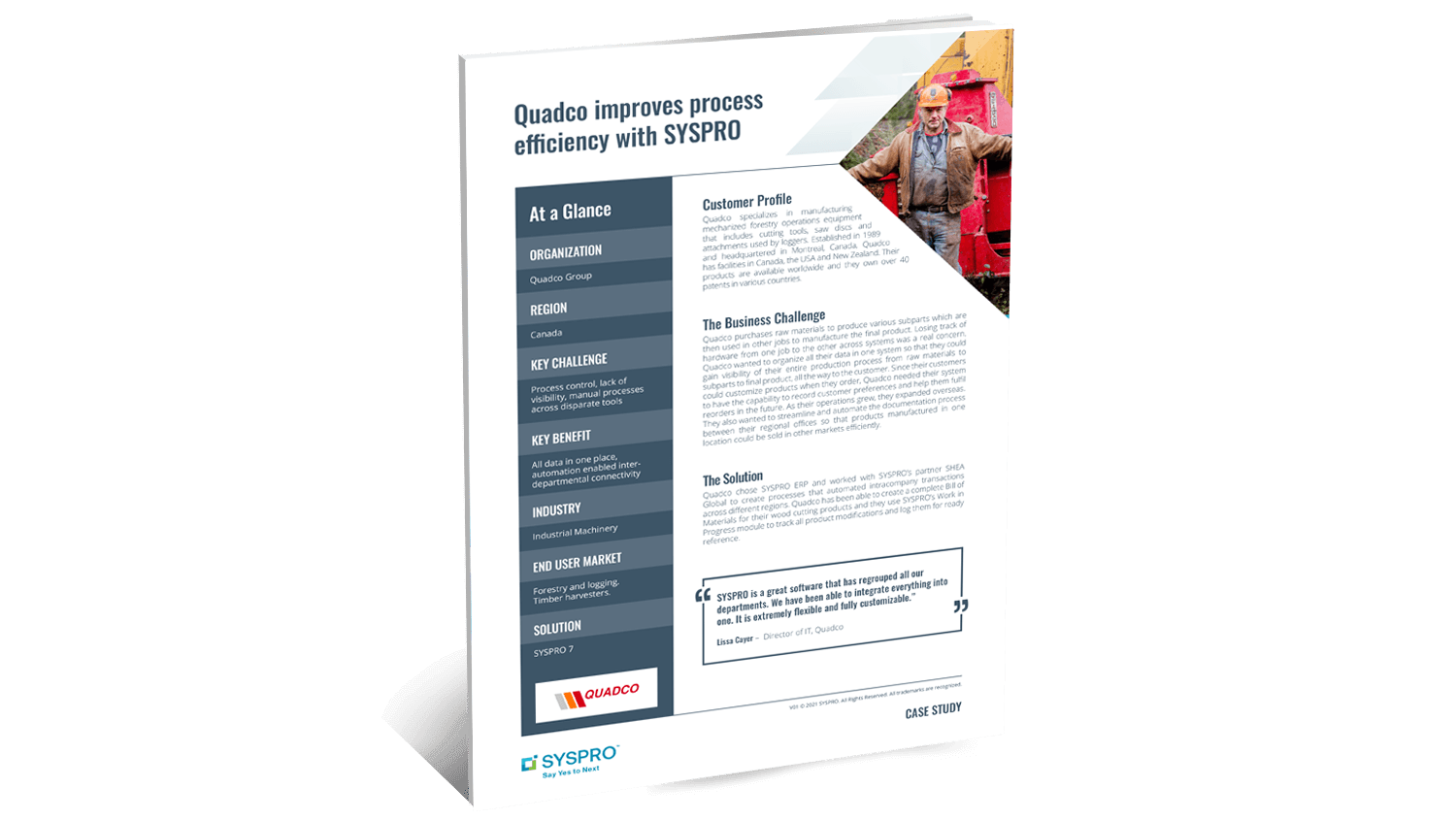 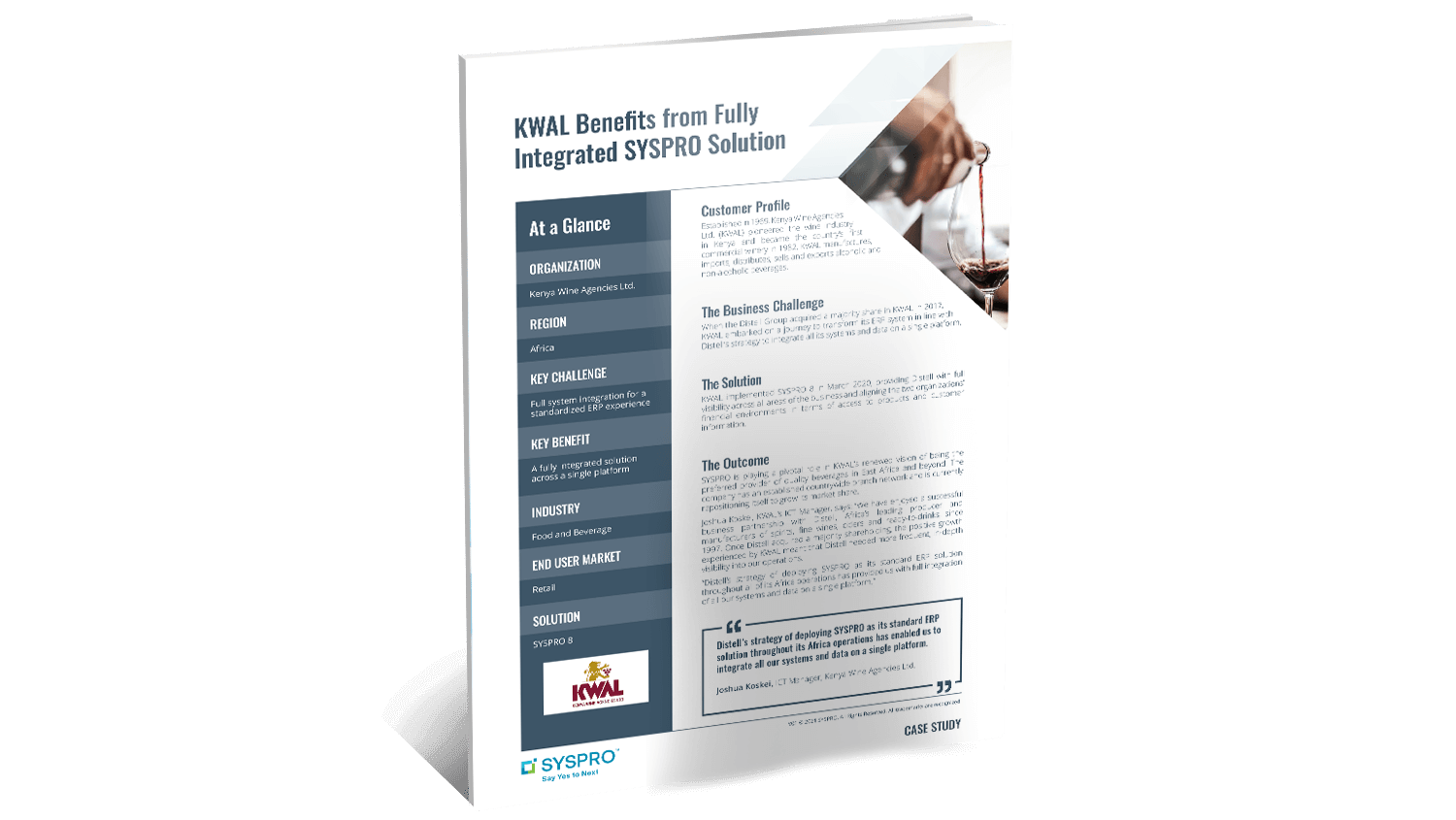